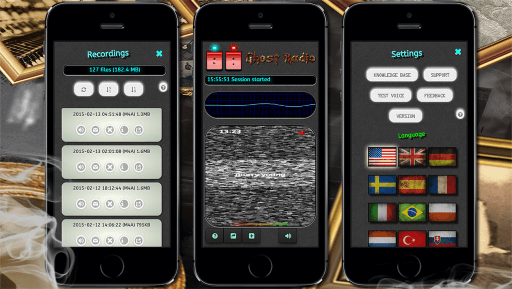 First of all, I want to thank everybody for all the constructive and postive feedback!

The new Android version (1.1.0) of Ghost Radio was just released on Google Play and Amazon app stores. Please note that it can take up to 24 hours before you can upgrade.

Now we are focusing on the new version for iOS, and hope to be able to release it in the Apple Appstore in the coming weeks.

The new version includes a lot of the features that you have suggested:

Many users have asked for this, and we listened. From now on, the microphone of your device is used to record sessions. This means that everything you say during a session also will be heard on the recordings. If you like or don’t like this feature, please tell us!

Before, recordings were saved as low quality wav files, but the new version uses AMR format. AMR is the native audio format for Android. The files are really small compared to wav files; A 50 minute recording is just over 5MB!

When playing back recordings, the new media player lets you fast forward and rewind. This feature only applies to recordings that have been created using the new version of the app. Previously recorded files, still use the legacy media player, due to compatibility reasons.

This switch, which can be found on the lower end of the Settings screen, makes the app start inperformance mode. This is suitable for devices with weaker processing capability. Try it if you experience sluggish performance when using the app on your device. Low-end device mode also drains less battery, which makes it suitable for Ghost hunting field trips. When this setting is changed, the app needs to be completely shut down and restarted. The app remembers your last choice, so you won’t have to do this every time you use the app, only when you change the mode. The Exit App button allows you to shut down the app.

It is worth mentioning that the media player in previous versions always loaded the full audio file into memory before playing it back. This lead to some problems for users using certain devices, and we are really sorry about that. Remember that you can always use the share feature to email recordings to yourself and then listen to them in another (full featured) media player either on your device or on your computer.

We constantly monitor app crashes being sent from users, and in this version, we’ve (hopefully) fixed most of them. If you continue to experience problems, please try the Low-end Device Mode mentioned above.

Apart from the things listed above, we also improved a lot of things here and there, in order to give you the best experience possible.

We’ve just launched a knowledgebase on our support site, where the most common questions will be answered along with small guides that hopefully help you to use the app in the best possible way: https://paranormalsoftware.com/support/kb/index.php